Indofood, an Indonesian trading group wished to raise funds by issuing bonds on the international money markets. In order to reduce the Indonesian domestic withholding tax (WHT) rate of 20% it issued the bonds through a Mauritian subsidiary company, Indofood International Finance Ltd, a special purpose vehicle (SPV). Under the Indonesia-Mauritius DTT, the Indonesian WHT on interest was reduced to 10%. Interest payments from the SPV to the bondholders were not subject to WHT in Mauritius, so the SPV could pass on the benefit of the reduced WHT rate to the bondholders. The terms of the bonds included a clause that if the Indonesian WHT went above 10% and no “reasonable measure” could be found to avoid the increase, then the Mauritian SPV could redeem the bonds.

Subsequent to the bonds that had been issued, the Indonesian government decided to terminate its DTT with Mauritius, consequently the WHT rate increased to 20% (for which Indofood was liable) and Indofood sought to initiate the get-out clause. JP Morgan, as Trustee for the bondholders, refused to accept this, on the basis that Indofood could set up a Dutch SPV to perform the same function but utilising the Indonesia-Netherlands DTT, and went to (an English) court. One of the most important conditions for reducing withholding taxes on interest paid to non-residents is that the recipient must be the “beneficial owner” of the interest. Amongst others, the court had to consider whether the Dutch SPV would be the beneficial owner of the interest payable by Indofood for the purposes of the relevant DTT. 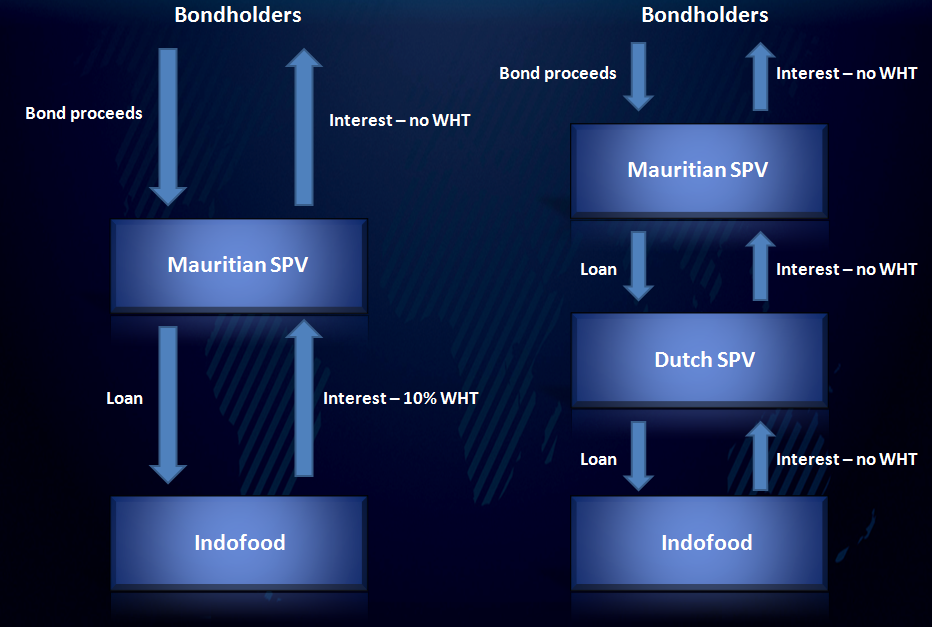 The Court of Appeal in England concluded that the Dutch SPV would not qualify as the beneficial owner of the interest. The key points of the reasoning were as follows:

– Beneficial ownership is to be interpreted in the context and in light of the purposes and object of DTTs.
– The international fiscal meaning of beneficial ownership is to be followed rather than any narrow technical domestic interpretation.
– The State of source is not obliged to give up taxing rights over interest income merely because that income was immediately received by a resident of a State with which the State of source had concluded a DTT.
– The beneficial owner is the person who has the full privilege to directly benefit from the income.
– An intermediary / conduit company that simply lends on the funds collected under the same conditions does not derive any direct benefit from the interest, so it hardly has the full privilege needed to qualify as the beneficial owner.

Even though the subject matter of the Indofood court case was the Dutch structure proposed by JP Morgan, the Judgement states that neither the Mauritian SPV nor the Dutch SPV qualifies as beneficial owner, therefore, were not entitled to claim DTT benefits. Furthermore, the court held that neither company meets the residence test, i.e. would qualify as Indonesian, rather than Mauritian / Dutch tax residents, respectively.

Interpreting beneficial ownership in light of the object and purposes of DTTs (that is, avoiding double taxation and the prevention of tax evasion) may prevent conduit companies from claiming DTT benefits merely on  account of the status of the immediate recipient of the income. When a conduit company, though the formal owner, has very narrow powers in relation to the income concerned, it is seen as a mere fiduciary and would not qualify as beneficial owner of the income concerned.

While conduit companies with very narrow powers in relation to a particular income stream may not qualify as beneficial owners, and hence are not entitled to DTT benefits, arrangements having real economic substance can still pass beneficial ownership and residence tests.

Applying the Indonesia-Mauritius DTT by Indofood (as long as it was in force) could have in principle been challenged by the Indonesian Directorate General of Taxation on the same grounds by applying the beneficial ownership and/or residence tests.