Tax residence is, in most Double Tax Treaties (DTT) and model treaties, established on the basis of the central management and control test that has generally not been applied to trusts earlier. Under prior practice the residence of a trust was by and large linked to the residence of the trustee (being legally entitled to the income of the trust). In a recent case Canadian courts held that the central management and control test does apply to trusts, and residence so established does not necessarily coincide with the residence of the trustee. Allocating rights and authorities in trust agreements and their de facto execution would therefore require even more careful consideration in the future.

Two trusts were established in the course of reorganization in the shareholding structure of a Canadian manufacturing corporation, acquiring indirect shareholding of the   manufacturing entity. The ultimate shareholders of the corporation were the members of the Garron and Dunin families, all of them resident in Canada, who became the beneficiaries of the trusts, settled under Barbados law, one for each family. The settlor and protector of each trust were non-Canadian residents, while trustee services were provided by a trust company resident in Barbados.

The trusts then sold their respective stakes of the manufacturing corporation and realized significant capital gains, which were not subject to tax in Barbados. Capital gains were reported in Canada, and advance taxes of non-residents’ potential Canadian tax on the disposal of taxable Canadian property were remitted. The trusts initiated a refund of the remitted amounts based on the capital gains exemption in the Canada-Barbados double tax treaty (DTT).

The Canadian National Revenue denied the refund on the grounds that the trusts were residents of Canada when they sold the shares. The case was brought to the Tax Court of Canada.

The shareholder structure prior to and after settling the trusts[2] 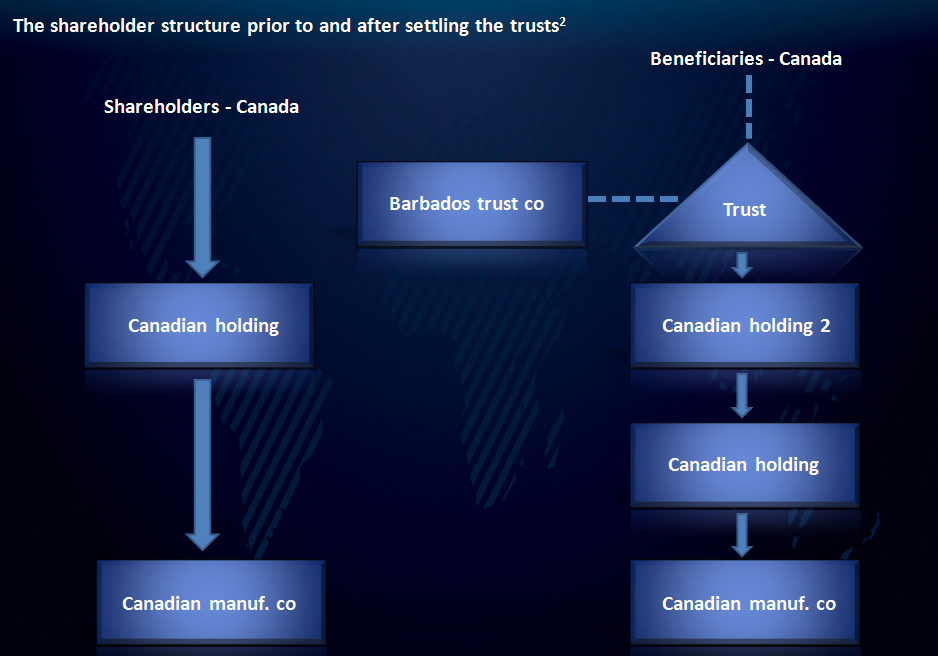 The Tax Court of Canada and the Federal Court of Appeal concluded that the central management and control test should also apply to trusts. The Supreme Court of Canada upheld the lower courts judgement that there were sufficient similarities between a trust and a corporation to justify the application of the central management and control test to establish the residence of a trust.

Based on the facts and circumstances of the case the courts found that it was the individuals resident in Canada, Mr. Garron and Mr. Dunin, who made decisions and exercised central management and control of the trusts and that the trustee’s role was limited to providing administrative services. The courts consequently held that the trusts were residents in Canada, and hence not eligible to capital gains exemption (on the disposal of taxable Canadian property) under the Canada-Barbados DTT.

The Garron Family Trust case shows that the central management and control test would need to be directly applied to trusts, and where facts and circumstances suggest that the central management and control is exercised by a person other than the trustee, possibly the settlor, or perhaps the beneficiaries of the trust, the residence of the trust would be established accordingly, irrespective of the residence of the trustee that purely administers the trust.

While using trusts remains an efficient tool for income accumulation or asset protection, more thoughts need to be given to the substance and implementation of trust agreements in order to ensure accessing DTT benefits – that is an important factor of trust arrangements, being typically multi-jurisdictional.

[2] The structures are simplified for modelling purposes.